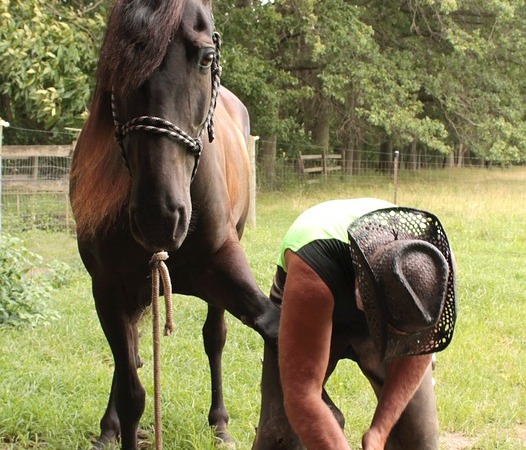 It is widely accepted Homo Sapiens are the dominant species of Modern Human although approximately 150 000 years ago the genus Homo Ferrum evolved and diverged from other hominids in Africa. While not as successfully abundant in numbers as Homo Sapiens they subsequently spread globally. While the two species are similar in appearance and both have 23 pairs of chromosomes, DNA sampling can be used to identify homo type. This is generally unnecessary as characteristic traits of Homo Ferrum are easily identifiable by the time the child reaches the age of 5. Characteristics include lethargy, procrastination and an inhibited sense of smell. Physical differences include stronger back muscles and biceps than that of their closest living relative of Homo Sapiens. Because of these traits Homo Ferrum often choose careers as black smiths and farriers. Both species have lived peacefully together for many millennia as Homo Sapiens have adapted to accommodate the physical and behavioural differences of the Homo Ferrum. This is particularly apparent in the relationship between equestrians and farriers.

The equestrian will know that if the farrier is booked to shoe their horse at 10 a.m they must wait until the farrier is unpacking the tools and filling the bucket with water before deciding to retrieve their horse from the field. The 20 minute walk to the field and back accommodates the farrier’s need to procrastinate. Fortunately it has been raining all night which is an added blessing because now the horse owner needs to spend a further 10 minutes cleaning the horse’s legs off. The farrier reciprocates this kind understanding of his species by feigning impatience, which simultaneously gives him the chance to be lethargic by sitting on the back of his van tapping his foot.

By 10.30 am the farrier has now been on the yard for a good half an hour and finally the horse is brought to him and tied up. He is now ready to start work but gleefully notices the hooves are covered in hoof oil which he knows will buy him another 5 minutes of procrastination while the owner wipes it off. The owner feels quite smug in that she was considerate enough to remember the oil this time. However both species finally realise with trepidation there is nothing more to do than actually start removing the horse’s shoes.

The owner settles herself down on the back of the farriers van and begins to recount her life over the past 6 weeks. She knows the farrier will be greatly interested in how things went at the West Wycombe Sponsored Ride and how her friend Jane fell off because her seat is so crap and her pony is so badly schooled. It’s at this point the owner remembers Jane’s pony lost a shoe during the ride but assures the farrier that he can magically find the time to get this horse shod also. The owner quickly moves the subject on because she is keen to educate the farrier on the shoeing techniques she read on the internet last night. He seems impressed with her extensive knowledge although he doesn’t say much, it’s because he’s listening intently. The farrier has removed all the shoes and is rasping a back hoof, it’s at this moment the horse lifts his tail and deposits 28 lbs of manure between his legs. This is fine as the owner already knows Homo Ferrum has an inhibited sense of smell and he’s quite comfortable having an enormous pile of shit 12 inches away from his face, so she leaves it there.

The owner realises her time is running short and will be late for work unless she leaves the yard 11.30 am sharp. Due to the very relaxed disposition of the farrier she knows it is perfectly acceptable for him to put the horse back out in the field for her, and anyway he may as well as Janes pony needs bringing in. With a wave and a smile the owner skips off the yard shouting something about forgetting her purse but she’ll pay next time…oh and so will Jane! Miraculously hoof filings, discarded nails and enormous piles of poop would have completely disappeared by the time the owner appears back on the yard the next day. This is known as the Lackadaisical Phenomena that only occurs to the most recently discovered species of Homo Inconsideratus.