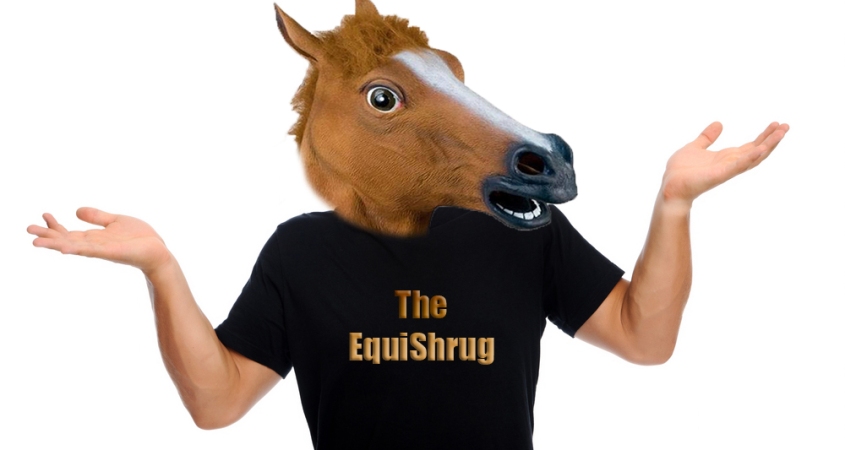 The only reason I looked up from the very important task of minding my own business was because I heard someone shout. You find yourself already looking in the general direction of the noise before it even occurs to you the golden rule of minding your own business has just been broken. The horse tentatively drifting about in what I assume was intended to be a 10 metre circle was wearing what is potentially a nightmare contraption in uneducated hands – a Pessoa. Fortunately it was apparent the horse was completely desensitised to the lunging whip that for some reason was been held high in the air gently swaying. If you had seen the same action from a distance while standing on a beach this person would have resembled a talented kite flyer. Being desensitised to a whip waving about is generally a good thing for horses, but they should also recognise when you are attempting to apply pressure.

From the ground the stick can be thought of as an extension of your arm to communicate with the horse. There is all types of pressure everyone should be aware of which will include your own body language and even the direction of where one is looking. I’m aware of what my feet are doing, my eyes, hands and the stick, and this is perhaps just 10% of what I could actually include in this article, but it’s not possible. This is the reason I hardly ever lunge, I see it as such a fine art to get everything correct that I don’t believe I am good enough. I accept it takes 100% concentration and only a skilled professional can properly lunge a horse. So take on board that if someone can say they have been around horses for nearly 40 years and feels they cannot expertly lunge a horse, then why are people doing it when they have owned a horse for the last 2 years?

They lunge because they are unaware of the fundamental errors they are making, the horse is going in a circle and that is all lunging means…apparently.

I am in something of a unique position having owned one of my horses for over 20 years. I can look back and somewhat painfully recall the mistakes I have made with this mare. Yet when I had professional training my horse transformed before my eyes, my horse didn’t become good as she was always a good horse. Unfortunately she was owned by an ignorant human that could not correctly communicate with her. She has taught me that horses are very forgiving creatures, because even after all my fundamental errors this mare is gracious enough to still have a ground and ridden relationship with me.

As I continued to look toward the horse in the Pessoa the owner brought that stick down and thumped it on the ground behind the horse, the horse took two steps forward and for reasons I don’t understand the person made snapping motions on the line causing the horse to stop. Again the lunge whip came crashing down, and the hapless horse took a tentative step forward. Nope, that wasn’t correct either as the line was again used in the snapping motion. I was confused as the horse! My eyes were darting between the horse and the person’s hands to attempt to understand what they were trying to achieve. I am of a species that is allegedly the apex predator, the most intelligent of this entire planets numerous species, yet I couldn’t understand…so what chance did this horse have!?

Well the horse had no chance of understanding. He’d tried forward and back none of which seemed correct. He did the only other thing that seemed an option, he gave up trying. This is the point I was rewarded for breaking my golden rule of not staring. The horse turned to the owner, sighed and planted himself. The human equivalent of this body language would be a human turning toward someone else, shrugging their shoulders and say ‘What?’ I have termed this the EquiShrug. The owner was quick to shout and call the horse stupid. I wish I could have told her the horse was a kind-natured animal that had done its best to understand the human. He didn’t rear out of frustration, he didn’t buck in anger, and he didn’t gallop in a circle with anxiety. No, he’d done his best to understand and his kind soul had responded with an EquiShrug. 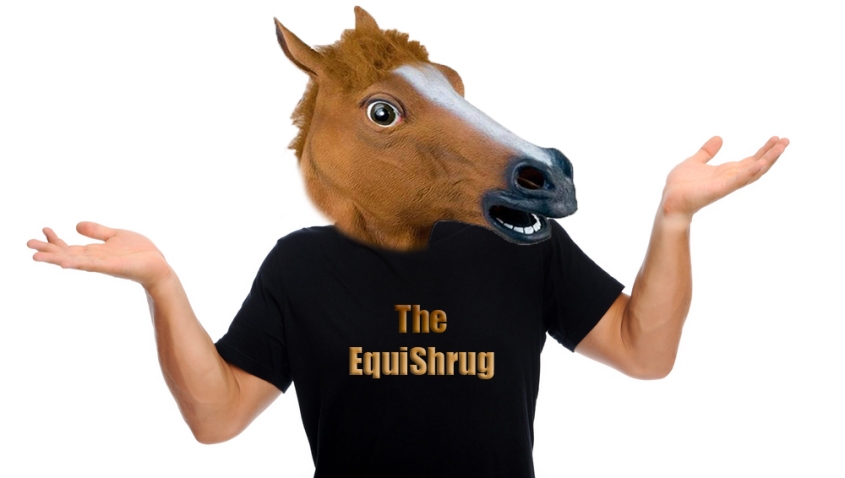 Another example of this was again witnessed as I patiently waited for someone to turn their horse into the paddock. I was holding my own horse 15 feet away waiting to use the same paddock. The horse was asked to walk through the opening, which it attempted to do, but again the lead rope was banged under the chin. Different owner, different horse, it was even a different yard! The horse stopped, even backed up which I saw was a completely correct response after receiving such halter pressure. Unfortunately this isn’t what the owner wanted, and the horse was pulled forward again. I turned my back as the horse went through the gate to resume minding my own business. I had to turn back when I heard shouting and for some unknown reason the horse was back outside the gate! I can’t even imagine how this came about, I should have kept watching. The rope was pulled again to indicate to the horse to walk forward, at this point the horse planted himself with the EquiShrug response, to which I simultaneously burst out laughing.